HOW CLOSE IS TOO CLOSE? ASK KEVIN ELWOOD AND CLEARVIEW COLLINWOOD 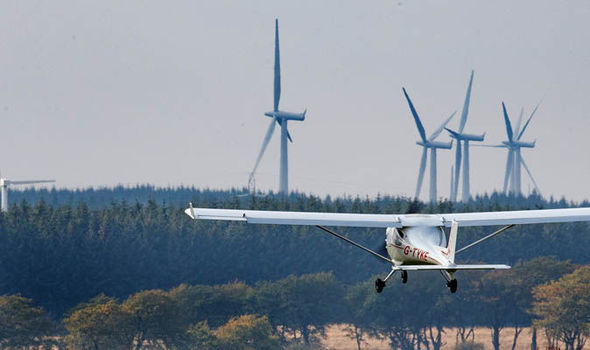 THE PERILS OF WIND TURBINES

If the TP 312 standard for the outer surface is included in the consideration, then any obstacle higher than 45 m (150 feet) above the elevation of the aerodrome within a 4 km radius of the aerodrome centre point would not be acceptable. This surface is intended to protect aircraft maneuvering in the vicinity of an aerodrome. However, to test if even the 4 km distance from the ends of a runway would provide adequate safety protection, an assessment was completed based on aircraft performance characteristics, suitable minimum obstacle clearance of at least 300 feet above the top of the turbines, and the possible wake and turbulence effects of the turbines. Using the same 70 to 90 mph light aircraft climb speed and the associated 300 to 400 feet per nautical mile (160 to 215 ft/km) climb gradient, the representative aircraft would be expected to be in the order of 700 to 850 feet above ground at the 4 km point. This should place the aircraft at least 300 feet above the top of a 400 foot high wind turbine, most likely to avoid the effects of the expected wake and turbulence. From this analysis, it might be concluded that at 4 km from the runway ends and along the extended runway centre line there would be adequate clearance.

Information on the potential effects on aircraft of wake turbulence generated by wind turbines is quite variable. Some information suggests that at three rotor diameters behind a turbine the turbulence may be largely dissipated, while other sources suggest it may still occur at a greater distance, as much as ten rotor diameters or more. Information available to us suggests that wind turbine companies may generally rely on a downwind distance of five rotor diameters in setting up the spacing between individual turbines so as to avoid the effects of wake turbulence on adjacent turbines. This standard can be applied in suggesting how far a turbine should be from a low level aircraft flight path. For example, using a five rotor diameter downwind allowance and a nominal rotor diameter of 100 m, this would mean a separation distance of at least 500 m. This would suggest that no turbine should located any closer than 500 m outside the 2 km outer boundary of the aerodrome air traffic or circuit pattern. COPA’s work in protecting aerodromes from Wind Turbine interference

In addition to COPA’s efforts to convince the Ontario government to consider the effects of wind turbines on aviation when the Green Energy Act was developed and attempts to engage Transport Canada in developing standards to minimize the safety impact on aerodromes,
COPA’s Freedom to Fly Fund is being employed to investigate legal aspects to determine if there is some basis to prevent encroachment on aerodromes or provide compensation for the loss of use. Our recent win at the Supreme Court level on federal jurisdiction is being examined to see if it is applicable to wind turbine encroachment on aerodromes. The Fund is also being used to conduct a formal safety risk assessment, in which the wind generation industry, the governments and others will be invited to participate. The end point of this exercise will be to determine the safety risks associated with wind turbines and develop risk mitigation measures that can be employed, either voluntarily or by regulation, to minimize the risks and continue aerodrome operation.

Until a firm direction is established, members whose aerodromes are being impacted by wind turbine installations are advised to get involved early in the development process to make your concerns known. You can use the calculations from this article to point out the safety issues and encourage the proponents to minimize their liability by keeping the turbines a suitable distance away from the approach, departure and circuit areas.