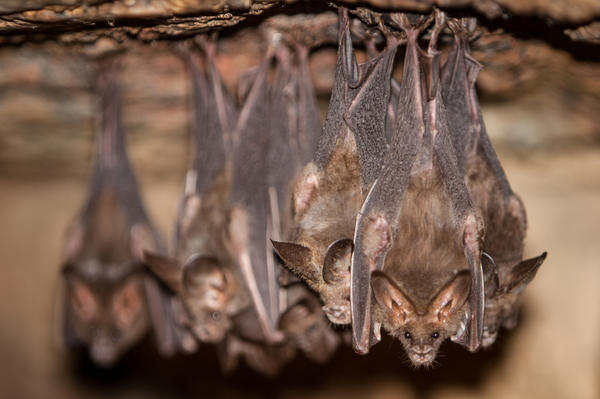 YPSILANTI – Bats aren’t the most appealing creatures. They sleep upside down, have furry faces and sharp teeth, look menacing and fly erratically. But those less than charming characteristics didn’t stop Olivia Maya Munzer from getting up close and personal with them.

Munzer, a 2009 master’s graduate of Eastern Michigan University, recently won a Midwest Association of Graduate Schools Distinguished Master’s Thesis Award for her research on a threatened Michigan colony of evening bats. The award, a monetary honorarium, was presented at the association’s annual conference April 21 in Cincinnati.

The competition, which recognizes scholarship by students pursuing their first graduate research degree, attracted more than 50 entries from around the Midwest.

Munzer’s thesis, “Ecology of the Evening Bat at the Northern Edge of Its Range,” dealt with the only colony of evening bats known in Michigan and the northernmost colony on the North American continent. In mid August, only female evening bats migrate to Michigan to raise their pups. Munzer’s research, which was conducted in Lenawee County, looks at the roosting ecology and diet of evening bats, a species that is listed as threatened in Michigan and endangered in Indiana.

Munzer’s research provides important information for wildlife managers not only in Michigan, but also across the range of the species, said her adviser, Allen Kurta, an internationally known bat expert and professor of biology at EMU.

Not only did Munzer’s research provide new insight into patterns of selecting a roost site and resting sites of animals in general, her dietary study documented that these bats are predators of serious pests such as the adult corn rootworm, the green stinkbug and the emerald ash borer, which attack corn, soybeans and ash trees respectively, Kurta said.

During her fieldwork, Munzer set up 30-foot tall and up to 60-foot wide nets over rivers and swamps at night, working from dusk until 1 a.m., to catch the bats. She then attached a radio transmitter to each bat before releasing them.

Since bats roost in cavities, crevices and under the bark of older trees, located in bottomland forests surrounded by agricultural fields, she used the transmitters to locate roosting sites, accumulate data on the bats’ behavior and habits, and collect fecal pellets to research their diets.

“Olivia’s research is an amazing study that has broader ramifications for climate change, biogeography, plant life, insects and threatened or endangered species, said Deb deLaski-Smith, interim dean of Eastern’s graduate school, who nominated her for the award.

An Austin, Texas resident, Munzer is currently a biologist with a Texas consulting firm, researching wildlife that resides near airports. Her job is to recommend ways to safely move wildlife or its food source, so they don’t interfere with the planes’ take-offs and landings.