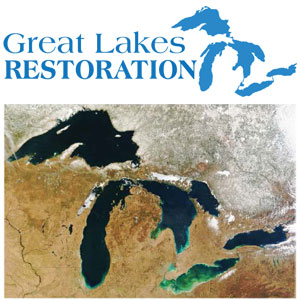 Some arrays would consist of 500 turbines towering 450’from the lake levels. NYPAs proposal was unveiled without input from the shoreline communities or businesses that will be the victims. Currently, Jefferson, Oswego, Cayuga and Wayne Counties are working towards unilateral opposition to this NYPA project in Lake Ontario.

The reasons of objection to NYPA’s plans for citing 1000-plus turbines in the Great Lakes are thus:

1. Offshore turbines require huge foundations. Sediments that have collected years of pollution and are now buried under cleaner sediments will be disturbed and pollution will be redistributed via the natural currents around the lake. Over the summer, the thermocline, in particular, is where the majority of sediments are transported and this is where the majority of trout and salmon reside. During the winter, the lake currents are much stronger. Sediments will also be disrupted during the laying of transmission lines.

2. Climate change advocates say that in addition to reducing carbon emissions that the world’s freshwater supply is dwindling and must be protected. The Great Lakes are a national treasure and are 95 percent of the U.S. fresh water supply. We can’t risk pollution accidents like occurred at Maple Ridge, where turbine oil contaminated the ground water, or like Fenner this last November when a turbine collapsed “for no apparent reason.”
The placement of industrial wind turbines in the Great Lakes seems to be in conflict with the water quality initiative contained in the Great Lakes Restoration Initiative. Our state and federal governments do not seem in harmony about environmentally sensitive areas to protect.

3. The RFP calls for nearly a thousand turbines. It is very likely that state and federal security forces will not allow anyone near these industrial wind farms. Thus a great portion of our lake will become out of bounds for fishermen and pleasure boaters. Vestas, a major turbine manufacturer, recommends a minimum of 1200 feet from any operational turbine for safety reasons.

4. Every year people and boats are hurt/damaged by navigation hazards out on the lake. The sheer numbers of these turbines will greatly increase the number of navigation hazards. Each turbine contains over 400 gallons of lubricant oils and liquids that can be extremely damaging to wildlife and fresh water supplies that our lakeshore communities use for a potable water source.

5. Transmission lines will interconnect the turbines and be run to various places along the shore. The lines operate at approx 0.5 HZ and 33 kilovolts. The U.S. Army Corps of Engineers is trying to stop the Asian carp in the Chicago sanitary canal with very similar electrical fields. This may have negative effects on the sport fish in the lake. Effects of decreases in fish populations adjacent to industrial wind turbine farms have been confirmed in Europe, where ocean wind farms have been constructed.

6. The location of the turbine farms will affect the fish. Salmon and trout make east-west traverses of the lake throughout the year prior to their annual run up their home rivers. Natural-born salmon were netted this past year off of Rochester. The DEC’s Lake Ontario unit confirmed that these small shakers could easily travel from the Salmon River to Rochester in much less than a day. University studies have found that salmon are affected by magnetic fields in that they become sluggish and align themselves with the fields. These swimming/migration patterns will definitely be disrupted.

7. OSHA prohibits a worker from coming within 27 feet of a transmission line unless properly attired – properly clothed and grounded.) The area where transmission lines come ashore may present a hazardous area for any boater, fisherman and swimmer.

The United States signed an international treaty with Canada to restore the Great Lakes, and this has been reinforced with the Great Lakes Restoration Initiative. For many years, agencies including New York State have put forth great effort and money into this. Sport fishing on the Great Lakes has blossomed into an industry that pays into local economies year after year. Offshore wind farms in Lake Ontario will do much more damage to the frail ecology and lakeshore economies of Lake Ontario than benefit the “green energy” movement.

The projects are bad community planning, especially in the water. People choose to live in and visit waterfront communities for the view and relaxation. These projects destroy the view, create noise and other pollution and devalue property.

The projects create a net loss in tax base when put in developed areas or areas of tourism. For all of the reasons stated above, communities stand to lose much more than they could ever gain – beginning with the traditional tax base.
————————————————
Robert E. Aliasso Jr. of Henderson is co-chair of the Coalition for the Preservation of the Golden Crescent and 1000 Islands Region. Tom Bishop of Rochester is a recreational fisherman.