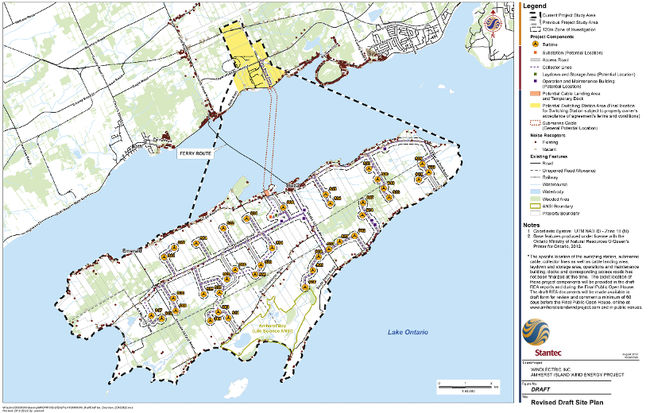 STELLA — The group battling a proposed wind energy project that could radically change the skyline of Amherst Island has taken its fight to the ground.

In its latest salvo, the Association to Protect Amherst Island has called for the Ontario Ministry of the Environment and Climate Change to better study the impact of the proposed project could have on the island’s groundwater.

Windlectric plans to build a 75-megawatt wind energy project on the 70-square-kilometre island, involving up to 36 turbines.

The association has been arguing that the project’s Renewable Energy Approval application is not complete enough to be approved.

In response to a series of inquiries earlier this year, the provincial government stated that groundwater could be protected during the construction, operation and maintenance of the project.

“The potential for impacts to groundwater quality and/or quantity is low,” the ministry stated.

In a letter last week, APAI president Peter Large cited a ministry-funded study from 2007 by Trow Associates Inc. that showed the importance, and fragility, of groundwater as a source of drinking water.

“The (Environment Ministry) is either unaware of or has ignored entirely the Trow Report, which indicates that Amherst Island exhibits “moderate to high to very high” sensitivity to pollution of its groundwater,” Large stated in his April 2 letter.

Windlectric “has made no effort to determine the effects of its 33 to 37 proposed deep excavations would have on island wells or that by merely opening up an excavation would allow polluted surface water into the groundwater supply,” Large added.

The Western Cataraqui Region Groundwater Study was prepared by the Cataraqui Region Conservation Authority and funded by the Environment Ministry, the Ontario Operations Clean Water Initiative and participating municipalities.

“This study examines groundwater in relation to its supply, natural quality characteristics and its potential vulnerability to contamination,” Large stated, quoting the study.

“Groundwater is the primary source of potable water in the study area.”

The study covered about 3,000 square kilometres — home to about 43,000 people — and noted that groundwater in limestone plains is particularly vulnerable to contaminants.

About two-thirds of the wells in the study area draw water from the limestone zones, the study determined.