Great Lakes Wind Truth / Newsworthy / INTERNATIONAL PERSPECTIVES / WHO CLEANS UP THE OCEANS: A post by Viv Forbes and comment by Sherri Lange
Dec 29 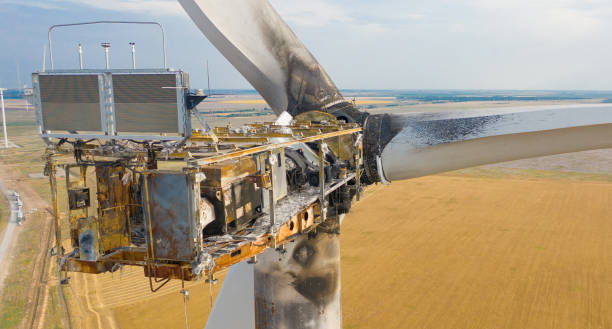 Sherri Lange: Please see an excellent review, commentary, Viv Forbes, on who cleans up, the vain and harmful effects of industrial wind offshore.

We say, “Oceans UP,” an interpretation of the Guardianship we need to have for ongoing offshore denigration and corruption. Maybe we should say: Oceans up, next! Next for destruction. (Oceans UP, Oceans Next, is an essay in progress, by S. Lange, on the proliferation of turbines in our precious oceans, waters.)

Now that half the planet is polluted and damaged, possibly for hundreds of years, populated with industrial wind turbines, highly toxic materials, decaying and tossing off molecule size aerosolized rare earth elements, for one, until Mom Nature takes over as she always does; they are after the OCEANS.

SEE BELOW FOR VIV FORBES’ ESSAY.

“I saw them now with a disgust that they had never roused in me before.
Horrible alien things which some of us had somehow created,
and which the rest of us, in our careless greed, had cultured all over the world.
One could not even blame nature for them.”
Bill Masen, in “The Day of the Triffids”

Wind turbines need a huge area to generate significant electricity. An area the size of Wales would need to be covered in wind turbines just to meet one sixth of UK’s daily energy needs.

So for years now, subsidised wind energy investors have been razing ridgelines, felling forests and slicing birds, bats and insects.  They trash the landscape to benefit a few landowners and speculators in a vain attempt to produce cheap reliable electricity from a low density, unpredictable, intermittent energy source. This is all driven by a blurry green vision that humans can change the climate by manipulating the atmosphere.

But neighbours and nature-lovers are fighting back. So now the wind speculators race for off-shore space in shallow seas.

“The Day of the Triffids” is coming for coastal communities as these towers of whirling knives accelerate their invasion of shallow coastal waters. They pose lethal danger to sea birds – beheading or de-winging pelicans and petrels, seagulls and sea eagles, gannets and grebes, kites and gliders. They also endanger coastal shipping, barges, helicopters, fishermen and tourists. And the noise pollution from pile driving and turbine whine is affecting whales and seals.

“Net Zero” targets and subsidies threaten to drive a nine-fold increase in demand for wind turbine ocean space – estimated to cover an area the size of Italy well before green energy nirvana is reached.

These turbines need energy to mine and manufacture the rare metals, steel, concrete and plastics needed to build and erect the towers and transmission lines in offshore waters – a careful analysis will show an energy deficit over their short lifetimes. And after every cyclone or tsunami, mangled turbine trash will pollute coastal waters and beaches – most of this trash cannot be recycled and will become toxic landfill. Mining operations have to lodge financial bonds to cover decommissioning, waste disposal and land rehabilitation at the end of the mine life – why are wind and solar “farms” exempt from these liabilities?

And imagine the defence vulnerability of scattered towers and transmission lines to sabotage from hostile submarines or drones.

Proven electricity generators driven by coal, gas, hydro or nuclear with a small land footprint are far less damaging to the environment of land and sea than the Whirling Triffids.

Where are the Green objectors now?

“The Day of the Triffids” (a novel) touches on mankind’s advances in science and technology as a possible contributor to the collapse of society.

“I saw them now with a disgust that they had never roused in me before. Horrible alien things which some of us had somehow created, and which the rest of us, in our careless greed, had cultured all over the world. One could not even blame nature for them.”
Bill Masen, in “The Day of the Triffids”