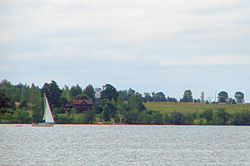 Amherst Island is the wrong place for industrial wind turbines. The Island is home to a lively rural community where the farmhouses, winding roads, stone fences and gentle landscape familiar to our ancestors have survived along with extraordinary wildlife.

Too Many Turbines! Too close together!

Amherst Island is in imminent danger of being transformed into an industrial landscape. A project to cover our small Island with up to 27 industrial wind turbines, each 50 storeys tall, is under consideration by Ontario’s Ministry of the Environment. The Heritage Canada Foundation named Amherst Island one of the Top Ten Endangered Places in Canada in June 2013 citing the threat of industrial wind turbines to the Island’s cultural heritage and the environment.

Because of the significant costs of developing a project on an island, the proponent has proposed the densest development with the tallest turbines in Ontario. The turbines will be so close together that the wake from one turbine will effect the efficiency of the adjacent turbines.

The Island is recognized throughout the world as the most important owl habitat in Canada, and as an Important Bird Area (IBA) of global significance. This internationally-recognized IBA is a “super-highway” for migratory birds and bats: hundreds of thousands of birds pass through this IBA during spring and fall migratory seasons. The IBA provides a safe haven for birds that arrive in the spring exhausted after a strenuous trip across the lake and provides a feeding ground in the fall so they are able to build up their strength for their journey south. Sizeable spring congregations of Brant and Dunlin have been recorded. Between 1994 and 1997 the average number of Brant staging at this site during the spring migration was 3,550, representing just over 1% of the North American population. The IBA is critical in terms of biodiversity, this diversity of habitats has resulted in Amherst Island becoming a renowned site for a wide variety of birds including shorebirds, raptors, and land-birds such as large concentrations of migrating swallows.