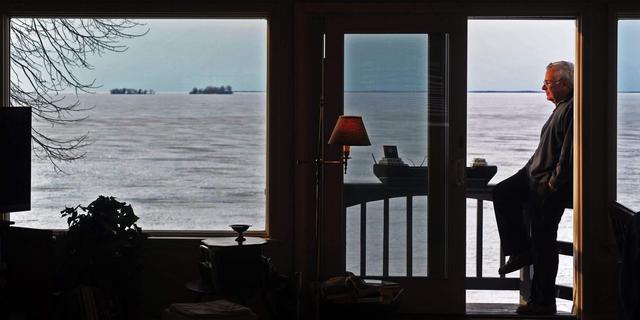 Henderson resident Mitchell L. Franz, whose waterfront home is on Bens Cove Road off Route 3, has been a charter fishing guide since 1983. He said his home is probably about 10 miles from Galloo Island, which he described as one of the prime fishing spots in the Thousand Islands region.

“The northwest side of the island is where charter captains fish for walleye and smallmouth bass,” the 72-year-old said, adding that guides fish in shoal areas near Stony and Galloo islands. On the northeast side of the island at North Pond, fishing guides anchor their boats to enjoy traditional “shore dinners” by cooking fish caught during day trips.

If turbines were built on the island, Mr. Franz said, “it will upset the tourism” in the region and could pose a deterrent to anglers who have fished here for decades.

But he said that could depend on whether the project’s underwater transmission line — which would create an electromagnetic field — would affect the migration of fish.

“As long as I’m catching fish,” he said, “I would do it with windmills in the background.”

Franklin D. Cean, co-owner of Harbor Marina in Henderson and president of the Lake Ontario Fisheries Coalition, said his chief concern is the effect turbines would have on the “pristine beauty” of Henderson Bay. The Henderson resident estimated the island is about 12 miles from the marina, about the same distance from his two-story home with panoramic views of the lake from Henderson to Pillar Point on Gilman Road off Route 3.