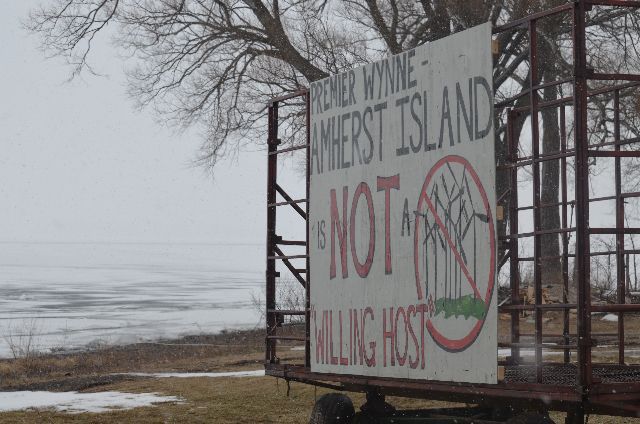 OPEN LETTER TO THE PREMIER OF ONTARIO, MINISTER OF THE ENVIRONMENT, AND MINISTER OF NATURAL RESOURCES AND FORESTRY: REGARDING OPPOSITION TO TURBINE PROLIFERATION AT ONE OF CANADA’S TOP TEN ENDANGERED PLACES, AMHERST ISLAND

“SO, I ASK, WHO AMONG YOU WILL BE THE FIRST TO ADMIT THAT THE RISK
TO FRESH WATER DESTRUCTION ON AI POSES AN UNDEFINED THREAT TO
HUMAN HEALTH AND THE ENVIRONMENT? THE RATE OF SPREAD THROUGH
GROUND WATER CANNOT BE DETERMINED, AND ONCE DONE, CANNOT BE
MITIGATED. WHO AMONG YOU IS WILLING TO TAKE RESPONSIBILITY FOR
THE POTENTIAL HUMAN HARM, AND IN THE CASE OF WILDLIFE, LIFE
ENDING DEVASTATION PROPOSED FOR AI?”

I am writing to voice my strong opposition to the desecration of Amherst Island with even one industrial wind turbine. No one would deny that Amherst Island (AI) has already been challenged by human effects. Few, if any, places on earth have not been, either directly or indirectly. And unfortunately, our human effects have largely been
destructive. In recent decades, however, there has been an awakening of sorts by environmental scientists that has spread to the masses regarding the seriousness of, and in many aspects, the irreversible damage we are causing that is altering the balance and health of our ecosystem. Adding to this, the validity of the environmental filth resulting from the manufacturing, transporting, placement, and subsequent environmental ruination associated with industrial wind turbines is becoming increasingly accepted worldwide. Wind developers are, therefore, scrambling to reap as much financial benefit from governments and municipalities as they can before the plug is pulled on this scam industry. AI is now proposed to become one more victim of this insanity.

Read more of this letter…