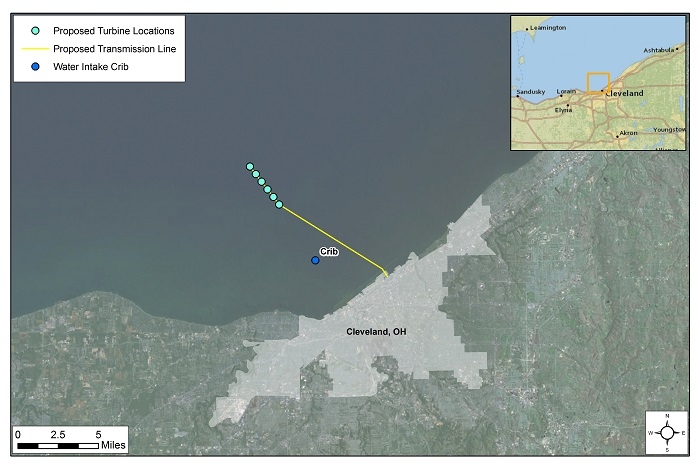 If the people of Ohio do not take immediate steps to defeat the LEEDCo Icebreaker project – Lake Erie will suffer forever the predatory nature of wind developers. The very beginning of this aesthetic travesty is the LEEDCo Icebreaker project. LEEDCo’s web site says they want to have 1000Mw of Lake Erie offshore wind by 2020 – this amounts to over300 offshore wind turbines in Lake Erie on the USA side – and this is just the beginning!

Here’s the pro-con dichotomy at work: A 2010 report from the National Renewable Energy Laboratory says that Lake Erie could accommodate enough turbines to power about one-third of Ohio’s more than 5 million homes. To get there, however, the lake would be pockmarked with more than 11,000 of the biggest wind turbines ever made (each of which ascending to nearly the height of the Huntington Bank Building downtown). Given rotor span and overall height, that would take up about half of the lake’s entire area.

What Lake Erie riparians MUST do to defeat LEEDCo –

The LEEDCo Icebreaker project is illegal!

IT IS THE POLICY OF THE STATE OF OHIO TO PROTECT THE PUBLIC TRUSTHELD WATERS AND LANDS UNDERLYING THE WATERS OF LAKE ERIE,PROTECT PUBLIC USES OF LAKE ERIE AND MINIMIZE THE OCCUPATION OFPUBLIC TRUST LANDS FOR PRIVATE BENEFIT…

The waters of Lake Erie and lands underlying them belong to the state as proprietor in trust for the people of the state for the public uses to which they may be adapted, subject to the powers of the United States government, to the public rights of navigation, water commerce and fishery, and to the property rights of littoral owners, including the right to make reasonable use of the waters in front of or flowing past their lands (O.R.C. 1506.10). Ohio’s “public trust doctrine” was originally established in 1803 when Section 14, Article III, of the “Northwest Ordinance” gave the new state authority to regulate activities occurring in navigable waters within state boundaries.

The U.S. Supreme Court ruled in Illinois Central Railroad Company v. Illinois 146 US 387 (1892) that the state may not abdicate its control of public trust properties and leave them under private control. Subsequent court decisions have looked with disfavor upon governmental actions that reallocated public uses to those of a select, private party. The Illinois RR case is a landmark law case that is referred to in most any Public Trust Doctrine litigation.